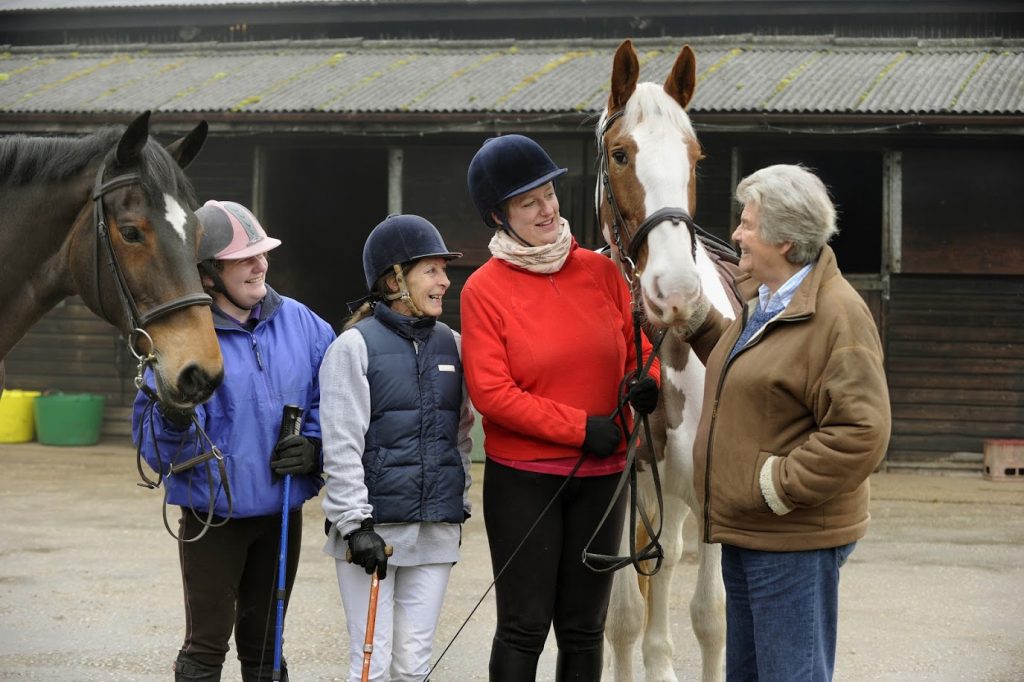 In the first large, randomized study of its kind, researchers at the University of Colorado Anschutz Medical Campus have shown a lasting reduction in irritability and other positive social and communication impacts on children with autism spectrum through therapeutic horse riding.

“There is growing evidence that human-animal interventions can improve emotional health and social wellness in youth, particularly those with autism spectrum disorder,” said the study’s principal investigator and lead author Robin Gabriels, PsyD, professor of psychiatry at the University of Colorado School of Medicine. “Our study was rigorous and the findings remarkable.”

The initial report of the researchers’ randomized study of therapeutic horseback riding (THR) with 127 children ages 6 to 16 years was published in the Journal of the American Academy of Child & Adolescent Psychiatry in 2015. It was the first to show that participating in 10-weeks of THR resulted in significant improvements in irritability, hyperactivity, social skills and word fluency compared to a barn activity control group that met at the riding center to learn about horses, but had no direct interaction with horses.

The researchers then did a 6-month follow-up of 44% of the participants from that initial study, published in a recent special issue of Frontiers in Veterinary Science. The study was the first to demonstrate that the initial benefits of 10-weeks of THR in this same population can have lasting benefits.

Reductions in irritability
Specifically, this follow-up study revealed that the THR group maintained their reductions in irritability, but not hyperactivity compared to the children who just learned about horses at the riding center. At the same time, when examining just the THR group, the results indicated that children sustained their initial significant improvements in social communication and word fluency.

The research provides evidence to show that THR may be an intervention that leads to the longer-term maintenance of initial benefits gained from equine therapy.

Yet the physiological mechanisms behind this remain to be discovered.

Some theorize that children diagnosed with autism spectrum might gravitate toward horseback riding because they are more comfortable with familiar routines.

“Horses are known to prefer the same routine, the same stall, the same path or route, and the same habits, similar to children with autism,” wrote L. Eugene Arnold, MD, MEd, of The Ohio State University in an editorial in the Journal of the American Academy of Child & Adolescent Psychiatry about Gabriels’ 2015 study. “More importantly, horses are content to be guided by nonverbal communication but are amenable to verbal instruction, allowing children to experience and practice the power of communication by controlling a much stronger force than themselves in ways within their repertoire.”

Calming gait
He also noted that a horse’s rhythmic stride can have a calming effect on the brain.

The study reflects that human interaction with animals can be beneficial on a number of levels.

“Most pet owners are only too aware of the ‘feel-good factor’ associated with pets in their lives. The important thing is that there is also a growing body of measurable scientific evidence showing the emotional, social and psychological benefits of interacting with animals,” said Dr. Darren Logan, Head of Research at the WALTHAM Centre for Pet Nutrition, a division of Mars Petcare that has partnered with the National Institutes of Health Eunice Kennedy Shriver National Institute of Child Health and Human Development (NICHD) for the past 10 years to study human-animal interaction. “This impressive study, part of our partnership with NICHD, adds to this evidence and provides a positive indicator of how animal-assisted therapy can play a role in improving the developmental outcomes of children and youth in the future.”

Dr. Gabriels, a licensed clinical psychologist who practices at Children’s Hospital Colorado, said that based on these findings, THR might be a safe and effective adjunct intervention for treating children with autism, and one that might help reduce the need for higher medication doses to address symptoms of irritability within this population.

“This is just the beginning,” she said. “We hope to conduct additional studies aimed at getting a better understanding of how exactly this form of therapy seems to benefit those with autism.”

We use cookies on our website to give you the most relevant experience by remembering your preferences and repeat visits. By clicking “Accept All”, you consent to the use of ALL the cookies. However, you may visit "Cookie Settings" to provide a controlled consent.
Cookie SettingsAccept All
Manage consent

This website uses cookies to improve your experience while you navigate through the website. Out of these, the cookies that are categorized as necessary are stored on your browser as they are essential for the working of basic functionalities of the website. We also use third-party cookies that help us analyze and understand how you use this website. These cookies will be stored in your browser only with your consent. You also have the option to opt-out of these cookies. But opting out of some of these cookies may affect your browsing experience.
Necessary Always Enabled
Necessary cookies are absolutely essential for the website to function properly. These cookies ensure basic functionalities and security features of the website, anonymously.
Functional
Functional cookies help to perform certain functionalities like sharing the content of the website on social media platforms, collect feedbacks, and other third-party features.
Performance
Performance cookies are used to understand and analyze the key performance indexes of the website which helps in delivering a better user experience for the visitors.
Analytics
Analytical cookies are used to understand how visitors interact with the website. These cookies help provide information on metrics the number of visitors, bounce rate, traffic source, etc.
Advertisement
Advertisement cookies are used to provide visitors with relevant ads and marketing campaigns. These cookies track visitors across websites and collect information to provide customized ads.
Others
Other uncategorized cookies are those that are being analyzed and have not been classified into a category as yet.
SAVE & ACCEPT
Scroll To Top